Calm down Dear, it's only social media

I've been at a number of event in the past year when that Socialnomics video was shown. Almost without exception, people were astonished and impressed by the statistics, with many worrying that they are already way behind all their competitors in social media usage. The combination of a pulsing Fatboy Slim beat, dazzling graphics and amazing numbers is a heady cocktail.

But hang on a minute. The old maxim about statistics (you know the one I mean) still has some validity. Many of the numbers in the video are somewhat misleading. For example, use of email is included as "use of social media". US statistics for certain age groups are presented without saying so, inferring they apply globally to all ages.

It would be perfectly possible to supply ststistics that show quite a different picture. Such as:

- 74% of the world's population have never used the Internet (Source: Internetworldstats.com)
- Twitter has reached 75 million users, but growth is now less than 8% a month (source (computerworld.com)
- Only 20% of Twitter users are "active" - defined as sending more than 5 tweets ever (source: Computerworld.com)
- If all active Twitter users in the entire world formed a city, it would be smaller than New York (source:Worldatlas.com)
- Only 10.6% of online time is spent on social media sites (source:Experian hitwise)

See what I mean? Depending on the statistics you choose, the perception can be very different.

OK, I can hear you thinking "Come on Alan, you're just an old hack who doesn't get social media". Actually, that's far from the truth. I've written a book about it, I use social media heavily, and I regularly give talks and seminars on the topic. I'm delivering a keynote speech at tthe Social Media in Business conference in London this Friday, for example.

My point is that social media is very important, and hugely significant. However, it can be over-hyped. I see that as a danger. If predictions fail to materialise, people lose interest and become cynical. I'm merely seeking a realistic approach.

When you're in a wood, everything is a tree. We can get so caught up in the world of social media that we think everyone else is, or soon will be. That may not be so, despite neat videos. A sense of proportion may be a handy thing to hang on to.
Posted by MediaCoach at 11:27 am No comments:

From X Factor to Deal or No Deal?: The General Election and TV

There's been a lot of chat about the impact of television on the outcome of the UK general election. In the event, the four-week campaign seems to have had little impact on each party's share of the vote.

The initial leadership debate appeared to have turned the tide in Nick Clegg's favour, like a Susan Boyle audition. Sadly for him and his party, there was no immediate text vote, and his opponents consulted their media advisers to outflank him in subsequent debates.

Then there was the election coverage itself, with various pundits leaping around in front of green screens, conjuring graphics to illustrate swings, both real and imagined. I felt sorry for Jeremy Vine, who by the end of the marathon coverage, was clearly suffering from ascending and descending the virtual staircase of number 10.

Now we have the TV appeals from the party leaders. Timed to avoid clashes, and delivered to potential partners in power, as well as to the country as a whole, they are fascinating vignettes of tactical byplay. It's interesting to note that the phrase "in the best interests of the country" is used often, though a cynic might note that the phrase really means "in my party's best interests".

Some argue that future elections may be fought online. That may be so. There is bound to be more emphasis on using a medium as ubiquitous as the web. In my opinion, video, whether viewed online or on HDTV (the distinction is disappearing rapidly) will remain an important way of delivering a message. There's a popular mythology that Barack Obama won the US presidency by making heavy use of social media. To my way of thinking, it was a small but important element of his overall campaign, which relied more heavily on TV appearances and text messaging.

For a 75-year-old medium, TV still plays a huge role in politics, and I suspect it will continue to do so for a long time to come.
Posted by MediaCoach at 12:17 pm No comments:

Winston and Sylvia - why voting is important

A ten-minute walk from where I live in East London, there are two monuments. One is large and impressive, and a well-known local landmark. The other is small and hidden, known only to a few locals, historians and researchers.

The large monument is a statue of the former local MP, Winston Churchill. He was the head of a wartime coalition government which turned the course of the second world war. He is rightly celebrated, and once stated "It has been said that democracy is the worst form of government except all the others that have been tried." 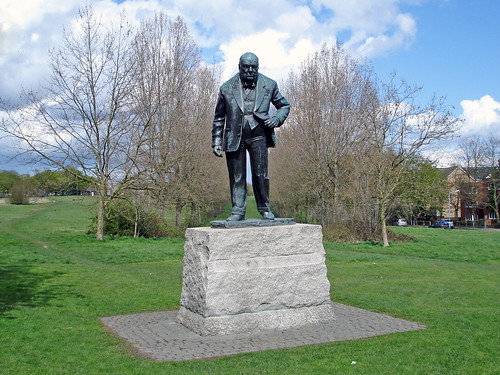 A short distance down the hill is a small triangular wooded patch of land opposite the tube station. This morning, a few straggly bluebells are blooming there in the watery sun. A small brass plaque shows that the copse was named Pankhurst Green in 1990, in honour of the sufragette Sylvia Pankhurst, who lived in a house nearby from 1932 to 1956. In fighting for the deocratic rights of women, she was imprisoned and force-fed many times before eventually achieving her objective in 1928, when all women, regardless of income or status, were finally allowed to vote.

Winston and Sylvia clashed many times in the village local village halls and the columns of the local paper. Winston was elected as both a Liberal and a Conservative MP, whereas Sylvia was at various times, a member of the Labour, Conservative and Communist parties. They disagreed on many things. However, there was one issue on which they were in full agreement; the importance of every citizen having a vote.

I know that many people are disillusioned with politics and politicians. 'Twas ever thus. Democracy is not a perfect system, and the likelihood is that this is the last general election without any element of proportional representation. However, voting is a right that we should cherish. I will be voting, as always, on election day. I remember Sylvia Pankhurst, who fought to give everyone that right, and Winston Churchill, who fought to let us keep it.

Please take just a few minutes on May 6th to use your vote.
Posted by MediaCoach at 8:44 am No comments: