The Wimbledon Guide to Email

1) Get it back over the net. Focus on responding to emails within 24 hours, even if you don't have the full answer. People value a response of any kind, and it will stop them asking "did you get my email?"

2) Be aware of the other person's style. Try to respond in a manner that is appropriate for the person you are dealing with.

3) Stay within the court boundaries. Stick to the topic in hand, and don't wander about all over the place. Stay focused.

4) Keep the outcome in mind. It's not just about occasional point-scoring, there's probably a longer-term goal in mind.

5) Serve when it's your turn. Be helpful, and remember that at least half the time, your job is to serve.

6) Ask the umpire. Sometimes, you may need to consult a third party to resolve a dispute.

7) Accept the result gracefully. Whether you get the outcome you want or not, accept either outcome without gloating or complaining.
Posted by MediaCoach at 5:57 pm No comments:

In praise of - Media Studies

OK, I obviously have to make a huge declaration of interest here. I'm a media guy. I made my first radio broadcast, aged 14, in 1967. I'm not exactly unbiased.

I've been in many discussions over the years, both on and off the media, about the value of "media studies", both as a subject examined in schools, and a degree course. In most debates, one protagonist argues it's a "soft option", while I defend its value and equivalence. Neither of us shifts our position, the phone-in guests usually take the "soft option" view, and we're halted by the traffic report (on radio at least).

Our 14-year-old daughter has just selected media studies as a GCSE option. She's bright (gets it from her mother), and is taking nine other subjects, including Russian, History and English Literature. I'm also a governor at her school, and the "link governor" for media, art and drama (each governor takes a special interest in a topic area). Accordingly, I've studied the syllabus, sat in on lessons, and talked in detail with the staff.

My conclusion is that media studies is not only academic, but it brings in many aspects of other subjects, such as literature (storytelling and the story arc), technology (computer generated image production), business studies (marketing of film, especially via social media) and psychology (acting and emotion). Getting an "A" is as tough as any other subject.

So why is it regarded as soft? We praise our top film-makers such as Ridley Scott, Gurinder Chadha and Ken Russell. We admire the talents of film actors like Joseph Fiennes, Keira Knightley and Helen Mirren. We lament the demise of the UK film industry. Nonetheless, many people sneer at young people with an interest and qualification in media. Funny old world, eh?
Posted by MediaCoach at 9:03 am 4 comments:

M&Ms show how to really extend a brand 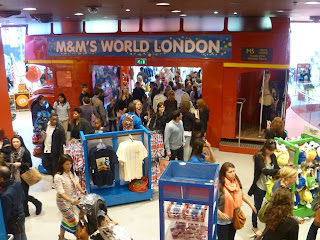 At the weekend, I visited the new M&Ms store in Leicester Square with my family. We'd already visited the M&Ms store in Times Square New York, so we knew what to expect. Even so, we were still overwhelmed (yet again). The place was absolutely packed with shoppers. There was pounding rock music, over-enthusiastic staff and brightly coloured stuff everywhere. 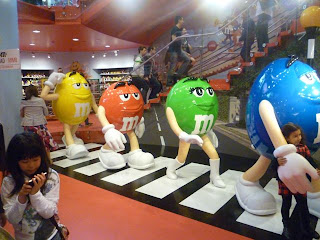 It's a very impressive set-up, with an atmosphere that almost compels people to buy. One of the cleverest features is the use of set-piece photo opportunities at every turn, so that people are not only drawn into the store, but linger while they are waiting to snap or be snapped. It's shopping as entertainment. Not only that, but some of the tableaux are clearly aimed at parents (or even grandparents, as this re-creation of the iconic Abbey Road album cover shows). There really is something for everyone. 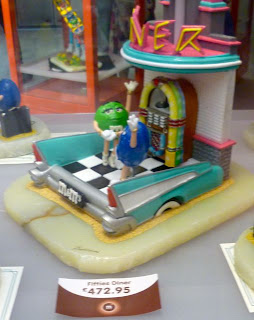 Obviously, you can buy M&Ms in every colour and flavour imaginable. But that's not where it ends. There are T-shirts, mugs, trays, shower curtains, sunglasses, models, etc, etc. In fact, everything you can think of that might have M&Ms on it, is available in a choice of colours. Even some things you would never have dreamed of, such as silver business card holders, are available at not inconsiderable cost. Take a look at the picture opposite. See the price on the model of the fifties diner? Over four hundred and fifty pounds. Extraordinary. So a packet of coloured sweets has launched a series of global superstores where people are clamouring to buy an amazing range of products, many of them not even edible. The question that I'm pondering, here in London, is: Smarties, where were you?
Posted by MediaCoach at 3:43 pm No comments:

I've spoken at thousands of events, and attended many more. Some have been astounding, some average, but many head-shakingly dull. When the most memorable part of an event is the goody bag, it's time to consider ways to liven things up. Here are a few suggestions:

1) Give the people what they want. The fact that you have access to a number of speakers who share a particular expertise does not mean you should build an event round them. Listen to the chatter on social media, talk to your clients and find out what problems they are trying to solve. Then look for experts to deliver the solutions.

2) Encourage interaction. The days of asking audience members to turn off their mobile phones are long gone. They will use them anyway, so make it easy for them to share information round Twitter hashtags, on Facebook pages and in other online forums. They are the best advocates for your event.

3) Make a one-day event last three months. Start the chat on social media long before the event, and encourage it to continue long after. The event itself is merely a milestone on the journey.

4) Book speakers who get involved. Ideally, your speakers should be there for the whole event, mixing with the delegates. It provides more value for everyone, since the speakers get feedback and find out real concerns, and the delegates have more opportunities to get their questions answered.

5) Get the technology right Too many events are ruined by poor sound, video that doesn't play or presentations that don't work. It's the reason why rehearsal time is important, and the need for a strong liaison between organisers, A/V staff and speakers.

6) Copy the best There are are a number of models for speaking events, from Ted.com to Takahashi. Take elements from other styles and adapt them for your use.

7) Never settle for anything less than great. It's getting harder to get people to come to events. Make sure that every element of an event is as good as you can make it. The weakest link in the chain may be the thing that people remember, so always aim high.
Posted by MediaCoach at 8:52 am 8 comments:

Are you who you say you are?

Authenticty. It's a word used by a lot of people in the speaking world, but it seems to have a variety of interpretations. I think it's about being clear and honest, and behaving in the same way that you speak about. For example, I believe that one sign of authenticity is using your own stories. Another is being honest about your qualifications and experience. It's also to do with having experience in the field of expertise you talk about. Most importantly, it's about never making a claim to be something that you are not:

Being authentic on stage is very important. You are creating a bond of trust with your audience and taking them on a journey with you. They need to believe that you are a trustworthy guide who will offer them insights and techniques to help them in future. You can demonstrate your authenticity in many ways. Here are a few ideas.

- Relate your experiences both recently and some years ago, and show how the same point still applies

- Consider a masterclass-style presentation, working with one or two audience members as a demonstration

- Refer to the work of other experts, and indicate how and why you agree or differ

Finally, make sure that you "walk the talk" offstage as well as on. If your topic is time management, make sure you are never late or in a hurry. If you talk about teamwork, work with a team. If you are a communication expert, keep your messages simple. It's all about authenticity.
Posted by MediaCoach at 2:52 pm No comments: