Please don't ask me for a testimonial...

...unless I've seen the quality of your work.

If I know you, and I know how good you are, I will happily give you a testimonial. You won't even have to ask, since I always write testimonials for people I work with (or see working with clients) that impress me.

Alas, I receive requests on a regular basis from people I've never met, or hardly know. Sometimes they have written a testimonial for me (often on LinkedIn), and ask for one in return. It's tough for me, since I don't wish to appear ungrateful, but I often reply explaining why I can't reciprocate. I often delete their testimonial for me too, since it's not based on any real evidence.

I believe that the practice of recommending and doing "testimonial deals" between individuals who barely have a relationship is devaluing testimonials in general. I'm not impressed by the number of testimonials on a profile. I rely on personal recommendations.

What's your view?
Posted by MediaCoach at 1:44 pm 4 comments:


TV presenter Dennis Norden used to front a show which featured clips of things going wrong on TV and in films. On one occasion, he mentioned the "oops factor", which he defined as "Objects Only Perform Sometimes". I believe it's a corollary of Murphy's Law, which states "If something can go wrong, it will" (to which I will add Stevens' variation "especially in front of an audience"). In short, you need to have a plan B.

It's impossible to anticipate every possible cause of problems on stage. There may be technical issues, venue problems or external factors that cause disruption. However. you can greatly reduce the chances of embarrassment by taking some simple precautions in advance.
The best advice I can offer is to stay calm. Your audience will understand that things can go awry, but as long as you deal with them with patience and a little humour, they will forgive you. In fact, you can make a huge impression on them by taking problems in your stride and not panicking. Here are a few things to reduce your oops factor.

Mike Tindall and the muppets at the RFU

Mike Tindall's international rugby career is almost certainly over. His removal from the England elite squad, and fine of £25,000 has made it unlikely that he'll ever pull on the white jersey with the red rose again. His punishment comes after a grainy video of his behaviour in a Queenstown nightclub with a former girlfriend, the day after England's game with Argentina.

It's clear that Mike Tindall had been drinking. So had most of his team-mates, since there was no squad ban on drinking or going to clubs. He also hugged, and was kissed on the head, by a former girlfriend. Er...that's it.

I'm not suggesting that Mike Tindall should have gone unpunished for being the worse for drink in a nightclub at 2am, but the penalty seems extraordinarily harsh. I think it has far more to do with the shambles at the top of the Rugby Football Union (RFU), and the struggle for power between the blazered officials. It looks like current head honcho Rob Andrew is trying to make a point.

Two England officials committed a severe breach of the Rugby World Cup rules by switching the ball before a kick. Their penalty? They couldn't sit on the bench at the next game. So deliberate cheating in a game is a minor offence, compared to having a few beers and being kissed by a former girlfriend?

No-one expects our sports people to be always completely sober and celibate. Bobby Moore and most of his England football colleagues were legendary drinkers. I was at Stamford Bridge many years ago when Bobby Charlton played his last game for Manchester United. He was given an award in the centre circle before the game - a silver cigarette box. Apparently he received a gallon of whisky in the dressing room later.

Having a drink from time to time is not a problem. I have a thick head right now after our team won the school quiz night last evening, and we returned home and drank the prize (some very nice shiraz).

Of course, times change. We expect our sports people to set an example. When they transgress, they should be penalised. But the punishment should be fair and proportionate, not a grand public gesture by an official trying to keep his job.
Posted by MediaCoach at 12:59 pm No comments: 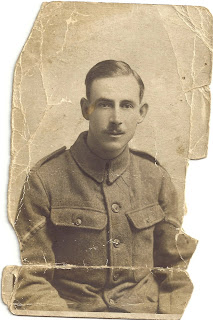 This is William John Godwin, my great uncle, and one of my grandmother's beloved two brothers. He joined the army in 1914, aged 20, and volunteered for the Machine Gun Corps. In 1916, he was posted to The Somme. On September 23rd, 1916, he fell in battle. All we have to remember him by is this photograph. His brother, Arthur, was in the Merchant Navy, and drowned on April 3rd 1917 when his ship, HMS Jason, was torpedoed.

My grandmother rarely spoke of her brothers. It was too painful. On the rare occasions when she did, it was with great sadness, but also great pride.

That's why I wear a poppy.
Posted by MediaCoach at 8:43 pm No comments:

Is your presentation too linear?

I was in Mallorca for a few days last week. The railway line that runs from Palma to Soller is not what you could call a straight line. It runs through tunnels and winds through mountains, but gets to the right destination. Speeches don't have to be a straight line either. Traditionally, you tell people what you are going to tell them, tell them, and tell them what you told them (the traditional "business sandwich"). Often a series of slides takes you along the path from start to finish, making it tough to deviate at all.

Some display software, such as Prezi allows the creation of a presentation from chunks of information that don't need to follow in any particular sequence. However, delivering a non-linear presentation is not about software, it's about an approach which many speakers find uncomfortable. Increasingly, audiences are demanding a style which is more than just a procession of slides, so now is probably a good time to think about your speech structure.

Not every speech lends itself to a non-linear style. Not every audience will appreciate it. Furthermore, you must still have some kind of overall structure and aim, otherwise you will simply be presenting a mass of information with no overall message. Delivering in a non-linear way may demand more preparation and more subject knowledge than a linear narrative. It may also require what a pal of mine used to call "a big dose of brave pills".

Many stand-up comedians are masters of non-linear delivery. They can deviate for minutes at a time, but still return to a core message. They may tell stories in a different sequence each time they speak, responding to prompts or questions from the audience, or just how they feel. In my opinion, the more interactive and non-linear you can learn to be, the more people will want to see you speak. You can choose to ignore the trend, but the train may leave without you.

Posted by MediaCoach at 2:58 pm No comments: