Posted by MediaCoach at 2:01 am No comments: 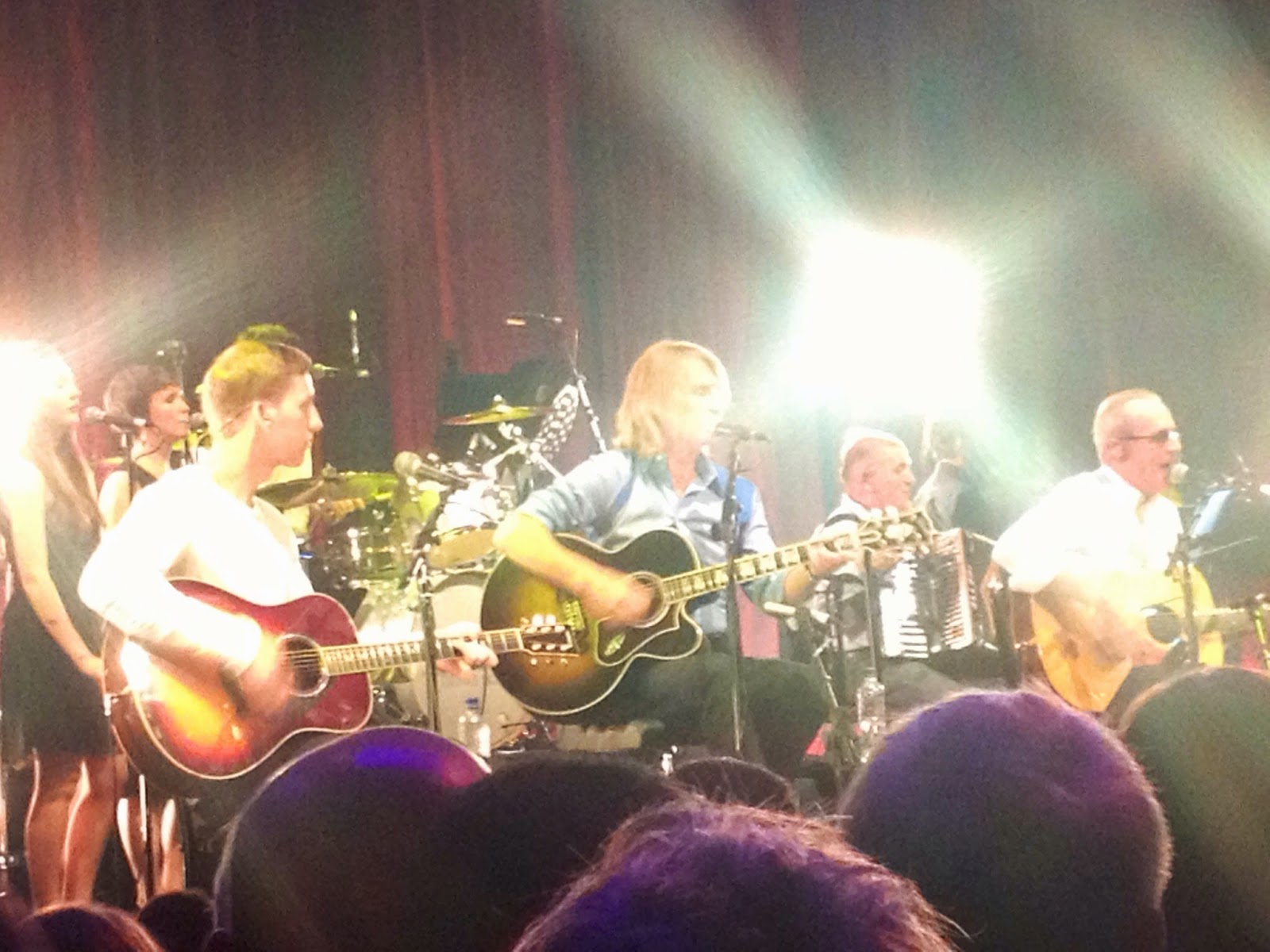 On Wednesday, I was in an enthusiastic crowd at The Roundhouse in London to watch a unique acoustic performance by Status Quo. It was simply fantastic, and made me think about a number of lessons they demonstrated that all performers, including speakers, should think about. Here are four ways that the the Quo demonstrated not only their professionalism, but some things that every performer should take care of.

1. Timing The concert was being broadcast live on the BBC, so had to start after the news at precisely 8.03pm, and finish at exactly 9.30pm. Even though the band played two encores, they kept exactly to that time constraint. Very impressive for a rock band. Speakers should show the same discipline. Over-running is disrespectful to the organiser and speakers who may follow. Under-running creates gaps in the programme that something has to fill. Keep to time, every time.

2. Connection With hundreds of loyal fans singing along with every song, it wasn't too hard for Status Quo to make a connection. However, they still worked hard from the stage to encourage the crowd to sing and dance, responding to call-outs with a smile, and playing with the crowd rather than to them. Speakers too need to make that vital connection so that a speech is not a monologue, but a dialogue, even if the audience role is simply laughter and applause.

3. Experimentation On the admission of Francis Rossi, the band was very nervous of playing an acoustic set. He joked that they'd felt sick the night before when they played a preview in front of family, friends and press. He even suggested there would be lots of wrong notes (I didn't spot any). The thing was, even after fifty years in the business, and over a hundred million sales, they were prepared to try something new. Doing the same old speech on stage year after year can make you stale, so finding ways to innovate, even for only part of a speech is vital. If it works, keep it in. If not, move on and try something else.

4. Delivery This is where the best performers excel. They know exactly what to deliver, and how to deliver it, to excite an audience. That comes only from experience on stage. It's why speakers talk about "stage time", or the need to get in front of an audience as often as possible.

Follow those four rules and you'll be rockin' all over the world. (Sorry!)

Posted by MediaCoach at 7:08 pm No comments:

Speakers from around the world; Galileo at the West Wing; BBC archives; John Grisham;  What doesn’t make an exceptional speech; How re-bookable are you?; Unique content can be priceless; An interview with Tim Campbell; Music from Dawn Langstroth

Posted by MediaCoach at 8:12 pm No comments:

Professional speakers gather in London; Early BBC; Virtual speaking; Harry Smith; John Lewis boss hates France; Lest we forget; Put yourself on air; How to use Twitter to enhance your event; An interview with Simon Jordan; Music from Ainsley Diaz Stevens

Posted by MediaCoach at 3:01 am No comments:

Party conferences continue; Virtual Speaking; Lynsey de Paul; Sainsburys; it’s not what you have, it’s what they need; You don’t have to be big to be noticed; How to con people with social media; An interview with Patricia Fripp; Music from Ashton Lane

Posted by MediaCoach at 5:02 pm No comments:

David Cameron made his last conference speech before the 2015 General Election with a clear aim in mind - to look like a prime minister ready for a second term. His theme; "A Britain everyone is proud to call home" ran throughout, in a statesmanlike delivery that was in some contrast to the forgetful approach from Ed Miliband. Like Barack Obama, Mr Cameron made use of poster-sized autocue screens at the back of the hall.

Rather than find his case studies on the heath, he sought a Normandy veteran, who received a huge standing ovation early in the speech, which set the tone of patriotism that ran throughout. It was clearly a pre-election speech, sounding not unlike a manifesto, with a number of promises, including a large increase in the tax-free allowance, to help that political meme "hard-working people".

Naturally, he had a jibe at the opposition leader for forgetting to mention the deficit with a nice piece of self-mockery about things he'd forgotten himself. As usual with politicians, he doesn't do humour very well.

He has a tendency to drop into a soft monotone just before delivering a strong phrase. I detect some coaching there, and I'm not sure it quite works.

In a remarkable section on education, he accused Labour of "hypocrisy". A bit of pot and kettle there, methinks. He also talked of the Tory party as being a "trade union" for many different groups. That played well in the hall, but the reaction on Twitter was not so warm. He referred to Twitter too, in a quip that fell flat.

As ever, as do all politicians, he employed a number of triple phrases with rising emphasis, or "clap-traps" as speechwriters call them. They worked well, especially since he emphasised them with a double-handed gesture, which produces almost Pavlovian applause. He's not as adept at applause-surfing

He became emotional in a section about the NHS, receiving a standing ovation, more for the way he spoke than what he said. Quite unusual for a political speech.

There was but one reference to UKIP, played out in a gag about "going to bed with Nigel Farage and waking up with Ed Miliband". Best laugh of the whole speech.

He's not one of the great political orators, coming across more like a competent CEO than an inspirational leader. However, maybe that's what people want. He definitely outperformed the Labour leader, and threw down a gauntlet for the election campaign. Time will tell if he judged it correctly.

I'd say it's his best conference speech so far. Eight out of ten.
Posted by MediaCoach at 12:40 pm 2 comments:

Are Tesco and Sainsbury's going the way of the dinosaurs?


Oh dear oh dear. The news about some big supermarkets has been pretty grim recently. Tesco has admitted that their half-year profits have been overstated by £250 million. That's more than the slip of a finger on a calculator. We'll know more after the Financial Conduct Authority has completed their investigation. But that's not the half of it. Tesco announced a delay in opening two new out-of-town superstores in September. There was fury in Chatteris, Cambridgeshire when the promised store, and the 250 promised local jobs disappeared behind chain-link fences.

Sainsbury's has not been immune to changes in shopping habits either. This morning, they announced that like-for-like sales had fallen for the third quarter in a row, after 36 previous quarters of growth. Sainsbury's is not being particularly bullish about the future either, saying that they expect sales in the second half of the year - including the busy Christmas period - to be "similar" to the first half.

So what went wrong? It seems that like many businesses before them, Tesco and Sainsbury's took their eyes off the ball. They failed to notice the impact of nimble-footed competitors like Aldi and Lidl taking customers away. In July, a YouGov BrandIndex poll found that Aldi was now the UK's favourite brand, despite taking only five per cent of food sales. Lidl was ranked fourth. Sainsbury's was hanging on to tenth place, but Tesco didn't make the top ten.

Warren Buffett said "It takes twenty years to build a reputation and five minutes to ruin it". It's not all over for Tesco and Sainsbury's by any means, but they need to think about evolving pretty fast.

Image Credit: Creative Commons licence
Posted by MediaCoach at 10:44 am No comments: